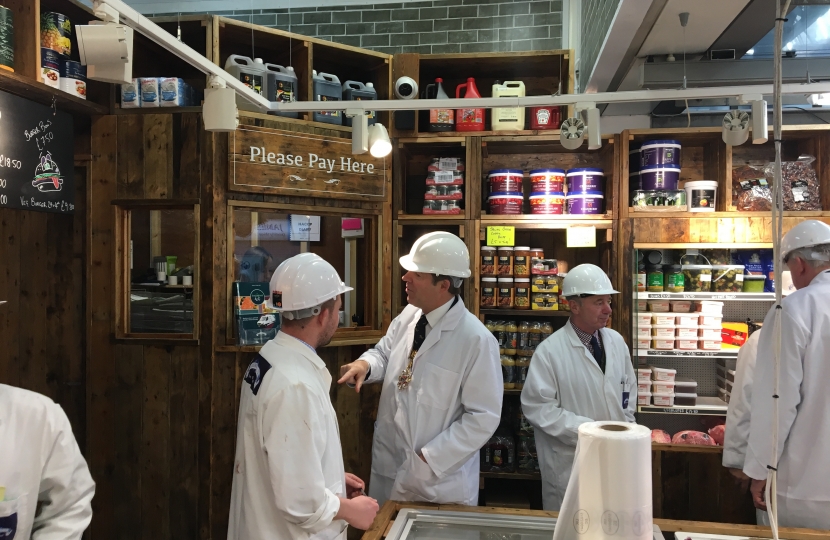 Councilman Tumbridge’s, Chairman of the Markets Committee report on the future of our markets:

The City of London Corporation has begun to re-imagine the landmark East and West Smithfield buildings for a potential future after our historic food markets re-locate onto one site.

Part of a significant investment in London the City Corporation Markets Committee plans to move the Smith field, Billingsgate and Spitalfields markets onto one site in Dagenham re-generating the areas as a food hub complete with a food school to train the future butchers, fishmongers and other trades needed to feed London.

The Smithfield design concepts are for open meeting and venue spaces, to compliment the proposed museum of London, for which the City Corporation has recently submitted an outline planning application. The early concept designs propose removing some of the more modern additions to the market buildings, including the loading bays and cold rooms to reveal the wonderful, elegant Victorian structure.  One of the newly exposed four halls could even house a sound-proofed multi-media entertainment space for local performances and cultural acts throughout the year, alongside independent food and drink kiosks – offering spaces for local start-ups and micro industries to develop and grow.

The City Corporation is now seeking feedback on its initial concept designs for the site as it continues to bring forward more detailed plans.

A Private Bill to Parliament is also required in order to move all three markets and a further iteration of the Smithfield concept designs will be submitted as part of that process later this year. We have also submitted our plans to move our historic markets to Dagenham Dock.

We are initially focused on the 42 acre site we acquired in Dagenham, and our plans are to include modern facilities for traders as well as a market school to train aspiring butchers and fishmongers. It will be built using sustainable materials.

By moving the markets to Dagenham Dock, the City of London Corporation hopes to be able to transport goods by rail and river where possible, alleviating pressure on the A13.

If consent for the outline planning permission is granted, the City of London Corporation will be required to submit a series of detailed planning applications to the council, with the target of opening the new markets by 2025/2026.

James Tumbridge, chairman of the City of London Corporation’s markets committee, said: “As we look beyond the current pandemic, it is so important to invest in the future and help recovery.  These plans aim to provide an exciting new home for our markets at Dagenham Dock that will safeguard their long-term future, securing jobs.  Importantly, a new food school will help to train tomorrow’s market traders by providing the skills required to develop the next generation of butchers, fishmongers, and fruiterers.”

The application was submitted following a consultation process which began last summer, and included public exhibitions in January and February this year. Of those who responded, 70 per cent were in favour of uniting the three markets.

The outline planning application is set to go before Barking and Dagenham Council’s planning committee later this year.

To view and comment on the application, visit online-befirst.lbbd.gov.uk/planning

Our new Covid Business Recovery Fund of £50 million will launch next Monday (12 April).