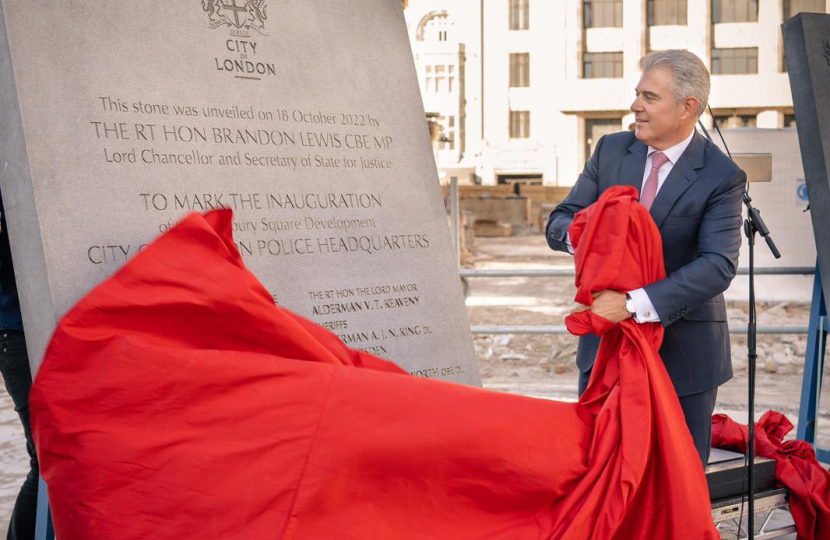 I’m delighted to report that today the foundation stones for our new courts and police action were unveiled, and I’m proud to have played a small part in bringing them forward.

This important investment is led by the City of London Corporation, and will benefit the Ministry of Justice and the City of London Police, comprising a 45,785 sqm civic scheme to boost the justice system’s work to crack down on fraud.

Lord Chancellor and Secretary of State for Justice, Brandon Lewis, unveiled the foundation stones for the development, designed by Eric Parry Architects.

With 18 courtrooms, the City of London Law Courts will combine magistrates, civil and crown courts in one flagship facility.

As the lead force investigating cyber and economic crime nationally, the new headquarters will equip the City of London Police with the tools needed to face the challenges of 21st century policing.

Home to 2,500 jobs – 400 of which will be newly created – the scheme will generate an estimated £51 million in productivity benefits (Gross Value Added) per year.

“The City of London Law Courts represent a vision of how justice will work in future - with modern, innovative and flexible courts in fit for purpose buildings.

“The Salisbury Square Development symbolises our place as one of the leading centres for business, law and justice as we ensure that the UK remains attractive to global business and investment.”

Chairman of the Capital Buildings Committee at the City of London Corporation, Sir Michael Snyder, said:

“We are celebrating a significant milestone towards the completion of an important civic development for the Square Mile.

“The City’s position as a world-leading legal centre with effective law enforcement plays a major role in helping the UK attract international business.”

The new buildings will have a design life of 125 years – more than double that of a standard commercial development.

The development will target a BREEAM sustainability rating of “Excellent” and over 99% of materials from the previous buildings have been reclaimed to be reused and recycled.

“This is an exciting milestone on the journey to a new, modern police headquarters for the City of London Police in 2026.

"The use of the space to bring all aspects of the justice system in one place is more than simply symbolic: it demonstrates how businesses, the judicial system and the police are part of a whole-system approach in keeping those that live, work or visit the City safe, and feeling safe.”

Today it was wonderful to be back among Canadians at the UK Canada Chamber of commerce event fundraising for the the Canada-UK Foundation.