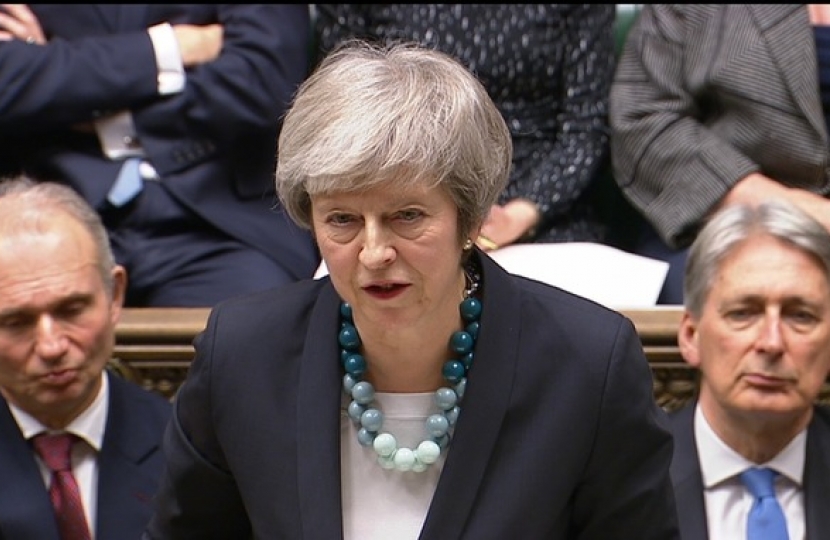 We have now had three days of debate on the Withdrawal Agreement setting out the terms of our departure from the EU and the Political Declaration setting out our future relationship after we have left.

I have listened very carefully to what has been said, in this chamber and out of it, by members from all sides.

From listening to those views it is clear that while there is broad support for many of the key aspects of the deal, on one issue – the Northern Ireland backstop – there remains widespread and deep concern.

As a result, if we went ahead and held the vote tomorrow the deal would be rejected by a significant margin.

We will therefore defer the vote scheduled for tomorrow and not proceed to divide the House at this time.

I set out in my speech opening the debate last week the reasons why the backstop is a necessary guarantee to the people of Northern Ireland and why - whatever future relationship you want - there is no deal available that does not include the backstop.

Behind all those arguments are some inescapable facts.

The fact that Northern Ireland shares a land border with another sovereign state.

And the fact that Brexit will create a wholly new situation: on 30 March the Northern Ireland/Ireland border will for the first time become the external frontier of the European Union’s single market and customs union.

The challenge this poses must be met not with rhetoric but with real and workable solutions.

Businesses operate across that border. People live their lives crossing and re-crossing it every day.

And if this House cares about preserving our Union, it must listen to those people, because our Union will only endure with their consent.

We had hoped that the changes we have secured to the backstop would reassure Members that we could never be trapped in it indefinitely.

I hope the House will forgive me if I take a moment to remind it of those changes.

The customs element of the backstop is now UK-wide. It no longer splits our country into two customs territories. This also means that the backstop is now an uncomfortable arrangement for the EU, so they won’t want it to come into use, or persist for long if it does.

Both sides are now legally committed to using best endeavours to have our new relationship in place before the end of the implementation period, ensuring the backstop is never used.

If our new relationship isn’t ready, we can now choose to extend the implementation period, further reducing the likelihood of the backstop coming into use.

If the backstop ever does come into use, we now don’t have to get the new relationship in place to get out of it. Alternative arrangements that make use of technology could be put in place instead.

The treaty is now clear that the backstop can only ever be temporary.

And there is now a termination clause.

But I am clear from what I have heard in this place and from my own conversations that these elements do not offer a sufficient number of colleagues the reassurance that they need.

I spoke to a number of EU leaders over the weekend, and in advance of the European Council I will go to see my counterparts in other member states and the leadership of the Council and the Commission.

I will discuss with them the clear concerns that this House has expressed.

We are also looking closely at new ways of empowering the House of Commons to ensure that any provision for a backstop has democratic legitimacy and to enable the House to place its own obligations on the government to ensure that the backstop cannot be in place indefinitely.

Mr Speaker, having spent the best part of two years poring over the detail of Brexit, listening to the public’s ambitions, and yes, their fears too, and testing the limits of what the other side is prepared to accept, I am in absolutely no doubt that this deal is the right one.

It honours the result of the referendum. It protects jobs, security and our Union. But it also represents the very best deal that is actually negotiable with the EU.

I believe in it – as do many Members of this House. And I still believe there is a majority to be won in this House in support of it, if I can secure additional reassurance on the question of the backstop.

And that is what my focus will be in the days ahead.

But Mr Speaker, if you take a step back, it is clear that this House faces a much more fundamental question.

Does this House want to deliver Brexit? And if it does, does it want to do so through reaching an agreement with the EU?

If the answer is yes, and I believe that is the answer of the majority of this House, then we all have to ask ourselves whether we are prepared to make a compromise.

Because there will be no enduring and successful Brexit without some compromise on both sides of the debate.

Many of the most controversial aspects of this deal – including the backstop – are simply inescapable facts of having a negotiated Brexit.

Those members who continue to disagree need to shoulder the responsibility of advocating an alternative solution that can be delivered.

And do so without ducking its implications.

So if you want a second referendum to overturn the result of the first, be honest that this risks dividing the country again, when as a House we should be striving to bring it back together.

If you want to remain part of the Single Market and the Customs Union, be open that this would require free movement, rule-taking across the economy, and ongoing financial contributions – none of which are in my view compatible with the result of the referendum.

If you want to leave without a deal, be upfront that in the short term, this would cause significant economic damage to parts of our country who can least afford to bear the burden.

I do not believe that any of those courses of action command a majority in this House.

But notwithstanding that fact, for as long as we fail to agree a deal, the risk of an accidental no deal increases.

So the government will step up its work in preparation for that potential outcome and the Cabinet will hold further discussions on it this week.

The vast majority of us, Mr Speaker, accept the result of the referendum, and want to leave with a deal. We have a responsibility to discharge.

If we will the ends, we must also will the means.

I know that members across the House appreciate how important that responsibility is.

And I am very grateful to all members – on this side of the House and a few on the other side too – who have backed this deal and spoken up for it.

Many others, I know, have been wrestling with their consciences, particularly over the question of the backstop: seized of the need to face-up to the challenge posed by the Irish border, but genuinely concerned about the consequences.

I have listened. I have heard those concerns and I will now do everything I possibly can to secure further assurances.

If I may conclude on a personal note, Mr Speaker.

On the morning after the referendum two and a half years ago, I knew that we had witnessed a defining moment for our democracy.

Places that didn’t get a lot of attention at elections and which did not get much coverage on the news were making their voices heard and saying that they wanted things to change.

I knew in that moment that Parliament had to deliver for them.

But of course that does not just mean delivering Brexit. It means working across all areas – building a stronger economy, improving public services, tackling social injustices – to make this a country that truly works for everyone, a country where nowhere and nobody is left behind.

And these matters are too important to be afterthoughts in our politics – they deserve to be at the centre of our thinking.

But that can only happen if we get Brexit done and get it done right.

And even though I voted Remain, from the moment I took up the responsibility of being Prime Minister of this great country I have known that my duty is to honour the result of that vote.

And I have been just as determined to protect the jobs that put food on the tables of working families and the security partnerships that keep each one of us safe.

And that is what this deal does. It gives us control of our borders, our money and our laws. It protects jobs, security and our Union. It is the right deal for Britain.

I am determined to do all I can to secure the reassurances this House requires, to get this deal over the line and deliver for the British people.

And I commend this statement to the House